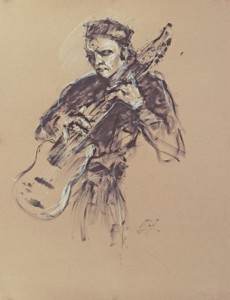 For over thirty years, Teed Rockwell has been playing many forms of world music on the touchstyle Veena—a guitar-like instrument which is played by tapping the strings with the fingertips, making it possible to play a separate part with each hand. Rockwell has performed in concerts and recordings with traditional musicians from many different cultures, including South America, Africa, China, and Ireland. Most commonly known as the Chapman stick®, Rockwell’s current version of the instrument is made by Mark Warr of Warr Guitars® with special customizations by Stephen White. The instrument has evolved through five different kinds of tuning and stringing before it reached its current form, and is now renamed the Touchstyle veena because it is designed for the performance of Indian classical and popular music.

Rockwell originally studied Hindustani ragas to find material for the fusion music he composed with harpist Diana Stork in the world music trio Geist. He performed this music at many well known concert halls, including Grace Cathedral, Great American Music Hall, the Yerba Buena center, and the Herbst Theater. Geist toured Europe, receiving international airplay and sales for their CD More Light. They were featured on the Polygram compilation album Harpestry, which reached the top ten on a Billboard chart, and has so far sold over 150,000 copies.

But as time went by, Rockwell became more drawn to Hindustani music in its purest form. He took over a hundred classes with the great sarod maestro Ustad Ali Akbar Khan and extensive private lessons with master sitarist Shahid Parvez. He became the music critic for India Currents magazine and wrote over a hundred articles on the many different styles of Indian Music. He interviewed great Indian musicians, including Pandit Jasraj, Hariprasad Chaurasia, Zakir Hussein, G.S. Sachdev, and Anoushka Shankar, from whom he received advice on how to improve his own playing. Finally he admitted to himself that he did not want to borrow bits and pieces of this music to create fusion—he wanted to play pure Hindustani Ragas. Today, even when he performs Indian Filmi Tunes with Bollywood Gharana, or with jazz drums, tabla and didgeridu in Australian Bebop Ragas, his own performances are based on the traditional ragas and talas of North Indian Classical music.

In addition to performing concerts and other engagements with traditional  drone and tabla  accompaniment, Rockwell also gives lectures and workshops on the melodies and rhythms of Indian music. His years of writing for India Currents, his experience as a public speaker, and his detailed knowledge of both Indian and American music, make him especially eloquent at explaining this music to western audiences.